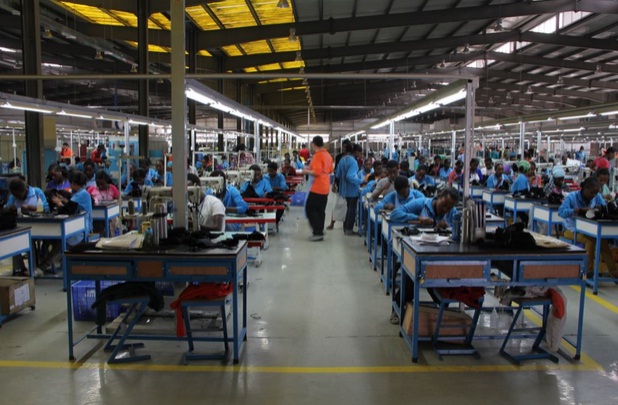 James L. Brown tried to hire a dozen workers for his metal foundry here. Half of them flunked the drug test.

Those results are typical, says the president of Bremen Castings, a family-owned employer of 350 workers who make parts for trucks and other equipment. Drug problems are one factor contributing to a labor shortage that delayed filling orders earlier this year.

“We’ve become a recruiting company,” Brown said of the relentless struggle to maintain a strong workforce.

The paradox has echoed through the presidential campaign, with both major candidates lamenting the loss of factory jobs – even as unemployment in most industrial regions has dropped to rates usually considered healthy.

The jobless rate in the county surrounding the Bremen plant, for instance, is less than 4 percent, according to state data. The national rate is 5 percent.

Such statistics, however, obscure the struggles of manufacturers and workers, particularly in the Midwestern U.S. Factories in the countryside are distant from pools of unemployed workers in cities. Drug tests are disqualifying more applicants. Low wages discourage others from taking jobs that are available, and employers say tougher immigration enforcement makes it difficult to fill many low-wage jobs.

The problem boils down to a quality issue on both sides: Employers gripe about workers with little work ethic, while employees decry falling pay for the kind of jobs that once fed families.

The logical response to a labor shortage is to raise pay enough to attract a quality staff, but many manufacturers say they can’t afford it in an era of rising global competition.

Bremen Casting in August raised its starting wage to $14 per hour from $13 – after raising it from 11.50 earlier this year. The company pays up to $27.50 for its top hourly workers. Brown said he’s nearing the limit of what he can pay because of pricing pressure from his customers.

The upshot is that most factory jobs, in the view of many blue-collar Americans, have been redefined as lower-level work. The average wage on factory floors fell below the average for all U.S. workers in 2006 and now sits at $20.57 per hour.

Many make much less. A third of factory floor workers collect some form of public assistance, such as food stamps, according to a study this year by the University of California-Berkeley’s Center for Labor Research and Education.

Among temporary manufacturing workers, the portion qualifying for government help jumps to 50 percent – on par with families of fast food workers. Between 2009 and 2013, state and federal governments spent $10.2 billion on assistance for factory workers.

Many employers are getting what they pay for, said Ken Jacobs, a coauthor of the study.

“You can’t both complain about a skills shortage and offer compensation that’s too low to attract workers,” he said.

Since the recession ended in 2009, more U.S. workers are choosing unemployment over the jobs available to them.

Among men between 25 and 54 years old, the share of those neither working nor looking for work – 12 percent – has doubled since the 1970s. The rate jumps to 17 percent for men without college degrees, who would be likely candidates for factory jobs.

They thought they might get a windfall because Manitowoc- a crane maker and once the town’s largest private employer – is shutting its local factory. So is another company, a foundry in nearby Brillion, Wisconsin.

But there’s been no surge of applicants at Schenian’s furniture factory, where the average worker makes about $15 an hour, compared to pay of up to $28 at the unionized factories that are closing, Schenian said.

Workers with specialized skills, such as welding, have seen wages perk up a bit amid the tight labor market. Power Curbers, an equipment maker in Salisbury, North Carolina, pays experienced welders “well over $20 an hour,” says CEO Dyke Messinger.

With little heavy industry in the area, he tends to have his pick of workers. But he’s also noticed more turnover lately.

“There are guys with higher skills seeing their talents bid up,” he says. “But that does nothing for the guy with average skill.”

Some experts believe the erosion of pay and opportunity in factories has helped create a generation of workers more prone to problems that make them less employable.

They also report more drug problems. A manufacturer down the street from Bremen Casting, who didn’t want to be named, uses a hair-analysis test to catch drug use. The company recently fired one employee after the man shaved every hair on his body before showing up for testing.

More permissive social attitudes about drugs, along with and marijuana legalization in some states, are complicating the issue for manufacturers, who need drug-free workers to handle dangerous equipment and chemicals.

The share of U.S. workers who fail drug tests has hit its highest level in a decade, 4 percent, according to a recent study by Quest Diagnostics, one of the nation’s largest testing labs.

That’s only those who were caught – such tests are better at identifying some drugs than others, and an entire industry has sprung up offering ways to beat them. Some applicants just don’t show up after they find out they have to take a drug test, manufacturing employers said.

Failure rates trended downward in previous decades, according to Quest’s records. The study found use of illicit drugs – from marijuana to heroin to methamphetamines – grew both among the general workforce as well as those in “safety sensitive” jobs like pilots and railroad engineers.

In some regions, the surge of opiate addiction has tainted the labor pool.

Back in Bremen, Brown says the drug problem has come in waves. First there was marijuana, then cocaine. Now it includes prescription drugs such as Vicodin and OxyContin.

And a wider array of workers is failing the tests, he says, including older, white-collar workers applying for accounting and sales jobs.

Beyond drug issues, business leaders have a bleak view of the traditional blue-collar labor pool, according to a steady stream of reports from consulting and industry groups.

Accounting firm Deloitte found recently that 84 percent of business executives see a “talent shortage” in U.S. factories. The study was conducted in partnership with the Manufacturing Institute, an employer group.

Some labor advocates see a shortage of money instead.

Workers accused of lacking performance, ambition or loyalty are reacting predictably to a lack of pay and opportunity, said Catherine Ruckelshaus, program director at the National Employment Law Project. She cited recent raises by Wal-Mart as an example of a corporation recognizing the importance of worker morale and retention.

“There’s not really a ‘skills shortage,'” she said.

Bremen is a factory town, with a population of about 4,800 and about 2,000 factory jobs, estimated Trend Weldy, Bremen’s town manager and Chamber of Commerce president. Many workers are drawn from the surrounding regions, including some who commute from distant farms and towns in Michigan.

Yet recruiting remains a daily struggle for Brown and Bremen Casting.

Among his competitors are two big operations in town that paint recreational vehicles, operations that are humming amid strong demand from baby-boomer retirees.

Even some longtime workers at Bremen Casting can pose problems, including absenteeism, said Sharon Calahan, the company’s director of human resources. Her all-time favorite excuse for ditching work came a few months ago, when a worker told her, “My girlfriend’s husband just died – and she’s distraught.”

The company has stopped strictly enforcing its attendance policy.

“If we held to it, we wouldn’t have those employees,” says Stan Hueni, the company’s employee relations manager.

One problem is that the company has cut itself off from a big source of local labor: Those in the U.S. illegally.

As recently as a decade ago, nearly half the workforce of Bremen Castings was Hispanic. But after the company implemented e-verify – a U.S. government program that identifies workers with legal status – the share of Hispanic workers has gradually declined. Brown made the change after some other companies in his area were hit with government immigration raids.

Today, Bremen’s workforce is only about 15 percent Hispanic.

Brown believes there are plenty of other potential workers on the fringes of the job market, but some aren’t particularly motivated. The company recently interviewed a 21-year-old man who had graduated from high school but never attended college or held a job. Brown decided not to give him his first one.

A tactic he may try is bringing in workers from local Amish communities in hired vans. That’s worked well for some local employers, but Brown has his doubts. Foundry work involves pouring molten metal, and many Amish seem more familiar with other types of wood and metal-working trades.

Among Brown’s more dependable employees is Steve Humfleet, who started eight years ago on the graveyard shift and moved to day work three years ago.

But the 43-year-old has little interest in overtime hours, for the same reason he wanted off the night shift: More time with his wife, Natalie, also 43, and two daughters, Shauna, 21, and Diana, 12.

In the past, Brown said, workers would compete for those extra hours, which pay 50 percent more.

He thinks this may in part be an impact of the recession, when many younger workers, in particular, appeared to learn how to get by with much less.

Humfleet doesn’t dispute that assessment. To him, time is more important than money. When not with family, he prefers to spend that time out hunting or target-shooting.

He tries to keep grocery bills low and routinely tells his two daughters that the family can’t buy all the things they want.

He and his wife, Natalie – who also works in a local factory – have chosen to build their lives, he said, “on 40-hour paychecks.”